Since Spring seems to have evaded us this year, I thought it might be a good idea to bring Spring to the plate instead.   This is a light, crunchy and tangy salad of beetroot, baby gem, lentils and goats cheese with added freshness from a dill vinaigrette.
Dill is one of my favourite herbs, mostly because it reminds me so much of home.   In Sweden, dill is scattered through the freshest new potatoes laced with butter and salt- I ask you, is there anything better?  It is also frequently used in pickles and added to traditional fish dishes.  You can even get crisps flavoured with dill and chives.  This dressing celebrates this underrated herb and is surprisingly versatile.  For the salad, I used the precooked, vacuum-packed variety of beetroot for convenience, but you could of course use the fresh kind, boiled or, even better, roasted.

1.  The easiest way to make this dressing is to toss all the ingredients into a food processor and wizz together.  But if you don’t have one, start by chopping the dill very finely.

2.  Mix with vinegar, salt, sugar and then finally add the oil.  Drizzle over leaves, beetroot, lentils and crumbled goats cheese.  Alternatively, use to dress green beans and peas and serve with fish.

Another way with grapefruits…

I think you can probably sense a  theme here.  This is also from Lucas Hollweg’s column, I guess I got a bit carried away.  A posset was originally a hot drink made out of spiced milk curdled with wine or ale in medieval times up to the 19th century- a bit like eggnog.  However, now it is used to refer to a cream-based semi-set pudding, a bit custardy, a bit syllabuby. In this recipe the creaminess and depth of the goat’s cheese is cut through by the sharp and slightly bitter grapefruit.   You may want to adjust the amount of grapefruit juice, depending on your taste. But for the most part, it just works.

2. In another, large bowl, beat the cheese until it is soft and smooth and put to one side.

3. Add the cream and the sugar to the pan with the zest and place on a medium heat.  Bring to a gentle simmer to dissolve the sugar, then leave to bubble for 3 minutes.  Remove from the heat and stir in the juices.

4.  Gently beat the cream mixture into the cheese with a whisk until smooth.  Pour into glasses, ramekins or, as I have done, espresso or teacups and leave to set in the fridge overnight.

5.  When ready to serve, cut segments from the grapefruit and use these to decorate the possets along with some sprigs of mint.

A note on meat…. and a pudding!

I am not one to vehemently advocate a particular ingredient over another.  I am likely to be enthusiastic, yes, but I would never veer into any territory that resembles preaching.  And there is one food topic I definitely won’t go near: the politics of meat.  But mostly that is, of course, because I don’t need to.  We all know the score:  eat less of it and when you do, buy the good stuff.  Organic, free range, steer clear of anything resembling a CAFO, so on and so forth.  Nuff said.
But the unavoidable issue comes down to money- the good stuff is pricey.  And even if you don’t buy it as often, paying what sometimes amounts to double (I had a quick comparison on mysupermarket.co.uk) stings, especially in these cash-strapped times.
I find the answer lies in going ahead and buying high quality meat, but the less popular cuts.  I honestly can’t remember the last time I bought a chicken breast, for example.  I find chicken thighs and legs are not only more flavoursome, they are generally less dry and more forgiving to cook with, not to mention a great deal cheaper.  I also use lamb neck in my harira, and I’ll roast a piece of fashionable pork belly (by now ubiquitous on gastropub menus) and serve it with spicy plum sauce.  I’m also looking forward to trying out recipes for ham hock and brisket.

The other week we had our lovely newlywed friends, Pete and Anna, for dinner and I had a real craving for some pâté.  I do on occasion order liver when eating out as I like the taste, however, it is quite rich and as such not something I would necessarily buy and cook a whole packet of.  But for a deep and smooth pâté, I made an exception and headed to the liver section of the meat aisle.   It took me a half hour to find.  Who would have known chicken liver is most logically filed next to minced lamb?  In any case, when I finally found it I was delighted by how cheap the good quality stuff was- for a measly £2, I got twice the amount I needed.
Here’s the recipe I used.
Chicken Liver Parfait.
Makes one cereal bowl full (but you may want to double the recipe for leftovers)
You will need:
225 g unsalted butter
225g chicken livers, trimmed
1 bay leaf
2 thyme sprigs
1 shallot, chopped
1 garlic clove,  minced
2 tbsp calvados or brandy
1 tbsp crème fraiche
sea salt, pepper
freshly grated nutmeg.
Method:
Melt 25g of the butter in a large frying pan.  Add the chicken livers, bay leaf, thyme and season with salt and pepper.
Fry the livers for about 3 minutes until they are golden on both sides but still pink the middle- do feel free to check by cutting the livers in half, it doesn’t matter as they are all going to be whizzed up into a paté anyway.
Discard the herbs and pour the livers and any juices from the pan into a blender.
Melt another knob of butter in the pan and add the shallot and garlic, sweating until cooked through.  Add the booze and simmer, enjoying the wonderful fumes, until almost completely dissolved.  Tip all this into the blender with the livers and purée until smooth.  Add the crème fraiche and blend again, making sure that the mixture is well-incorporated.
At this point, add the remaining butter and a good grating of nutmeg.  Continue to blend until you have a thick, paté-like consistency.
Spoon the parfait into a bowl and leave in the fridge until required.  It will keep for a couple of days but may need 10 min or so out of the fridge before serving, just to soften a bit.
Serve with sourdough bread, radishes, celery, red onion marmalade.  For this starter, I also made a goats cheese dip by mashing the cheese with some garlic, sea salt and mixing with crème fraiche and chopped spring onions, which provided a fresh counterpart to the meaty density of the parfait.
For a pud, I wanted something sweet and creamy and managed to dig out an old favourite recipe for Panna Cotta.  This is a honey and almond flavoured one that is at once velvety and grainy, with a nutty bite from the ground almonds that gives it a bit more substance.  It’s one of those puddings that never fails to impress, but is extremely easy to make.  The only tricky part is getting your gelatin just right- it needs to have dissolved completely.  If you don’t like the idea of using gelatin, agar-agar flakes are a seaweed-derived substitute you can find in most health food shops and even larger supermarkets.

Honey and Almond Panna Cotta
You will need:
1 sachet gelatin, 7g (or equivalent substitute such as agar-agar)
200ml double cream
250 g greek yoghurt
6 tbsp runny honey
50 g ground almonds
1 vanilla pod
4 ramekins, lightly oiled and lined with clingfilm
Method:
In a large bowl, combine cream, yoghurt and honey, mixing until smooth before adding the ground almonds.
Cut your vanilla pod in half length ways and then scrape out all the seeds.  Add to the mixture.
Prepare your gelatin or agar-agar flakes, following the instructions on the packet.  If you aren’t quite sure, add about 3 tablespoons warm water to a large bowl, add the gelatin and stir to dissolve before leaving to cool.  Make sure to add the gelatin to the liquid and not the other way around and that all the gelatin has dissolved completely.  Otherwise you may end up with strings of squid-like rubber in your pudding.  Which is rather unpleasant.  Once you’ve prepared the gelatinous water and are sure it has completely dissolved, add to the creamy mixture.
Divide this into your prepared ramekins and chill for at least 4 hours until set.  To serve, turn out onto plates, removing the cling film.
I accompanied mine with a simple orange, mint and toasted flaked almond fruit salad, but you could just as easily serve it with other fruits- summer berries would work particularly well.

Washed down with plenty of cool Sangria- that bit is a must, really. 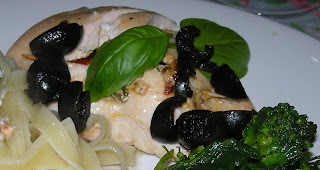 I had my friends Rory and Vicky round for dinner about a month ago and had a craving for this dish, which is an adaptation of one my mum used to make when I was younger. I think she’s forgotten all about it, which is fine because I can claim it as my own!

It’s ridiculously easy and can be accompanied by a wide variety of things. I paired it with tagliatelle with lots and lots of Parmesan and some tenderstem broccoli to make a big meal out of it but you could just as easily turn it into a lighter dish with a few leaves or perhaps some couscous? I think rocket would be particularly good here (again with lots of Parmesan). Definitely a maximum result for minimal effort dish.

First off, mash some soft goats cheese with a teaspoon or two of olive oil, some chopped up sundried tomatoes, olives and a handful of torn up basil. Season to taste. Adjust ingredients to your liking.

Cut a slit into a chicken breast, with your knife at an angle,to make a pocket (see diagram- yes, a diagram), not quite butterflying but a bit like that, I suppose. 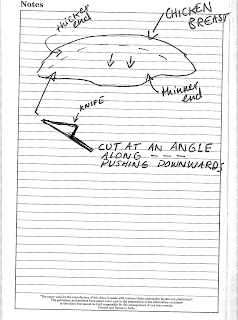 Stuff the chicken breast with the cheesy tomato mixture and secure it shut with toothpicks or brochettes or string- whatever you have to hand and find easiest. It doesn’t have to look pretty! Put onto a greased ovenproof dish and brush with some olive oil. Put into a preheated 200 degree oven. Leave for about 20 min but it will vary depending on your oven, so do check it after about 15 min.

The chicken should be juicy and the filling should be gooey and saucey. Scatter with some olives and basil. Any remaining filling can be used on bread, with pasta, veg or red meat. It’s versatility personified. Or poultrified, if you will.