I know, I know  I’m a little late in the day, I’ve fallen a bit behind on my blogging since being away.   But seeing as I did go to all the trouble of making hot cross buns this year, I thought I would share my recipe.

And in any case, why are these stupendous, soft and spicy little buns only allowed around Easter?  Who made up that rule?  I would quite happily eat them all year round.

1.  Warm the milk and butter over a low heat until the butter has melted.  Meanwhile, mix the flour, salt, sugar and yeast together in a large bowl.

2.  Add the zest and the raisins to the milk and butter and set aside to cool a little before beating in the egg.

3.  Stir the liquid mixture into the flour mixture and combine, using your hands if necessary, until you have a sticky dough.

4.  Work the dough on a floured surface, kneading until smooth.  Form into a neat ball and put in a bowl that has been lightly oiled and floured.  Cover with clingfilm and leave in the warmest spot in your home.  It should rise and almost double in size.

5.  Tip the dough out on to a floured surface, again and knead for a minute or two.  Form a sausage-like shape and cut off about 8-10 pieces of dough, depending on how large you’d like your buns to be.  Roll each of these into balls and put, evenly-spaced, on a lined baking tray.  Cover with a clean tea towel and leave to rise for a further half hour.

6.  Heat the oven to 200 degrees centigrade.   Make the crosses by mixing 50g plain four with about 5 tbsp tepid water.  Use a piping bag or a sandwich bag with a small hole cut out of it to decorate the buns with crosses- you may find that you want to adjust the flour or water content once you give it a go.

7.  Bake for 20-25 minutes, taking care not to burn them.  Heat the syrup in a pan with a tbsp of water and brush this over the warm buns to give them a nice sheen.

8.  Serve as they are or toasted with lots of butter.

Some pics of the cinnamon bun making process for classic Swedish kanelbullar. I made a massive batch for my Midsummer’s party. The recipe I use is my grandmother’s (Mormor), although for these I think used about twice as much cinnamon, sugar and butter as she does! The pics are of the buns in their ‘raw’ state, before I brushed them with egg and baked in a super hot oven.

Turning to a tasty treat in times of stress and uncertainty has been my downfall all my life. If only carrots were as comforting and satisfying as these breakfast buns. I made them when my housemate Andrew and I were desperately interviewing new housemates when our other housemate, Adam, decided to move south of the river. In the end the lovely Lucy, a friend of Andrew’s, moved in so the interviews weren’t really necessary. But at least I fed a bunch of homeless Londoners. Good times.

Original recipe from the 2nd Magnolia Cookbook, so the weights are in cups and ounces. I’ve put in the equivalent in millilitres and grams, which might be helpful. Might be just confusing. 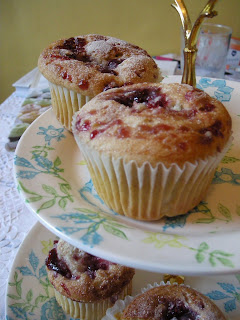 2. In a small bowl, combine flour, baking powder and soda and the salt. Set aside

3. In a large bowl, on the medium speed of an electric mixer, beat together cream cheese, butter and sugar until smooth, about 3 minutes. Add the eggs and beat well.

4. Add the dry ingredients to the large bowl, in two parts, alternating with the milk and vanilla.

5. Spoon the batter into the bun pans or muffin cups, filling them about 2/3 full. Drop a few dollops of raspberry jam into each and swirl into the batter. 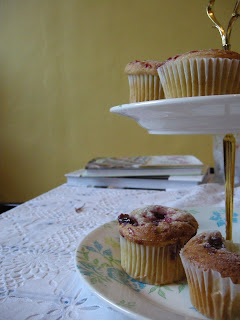 7. If you can wait, allow to cool for half an hour before dusting with icing sugar. Devour.

NB. When I tried these, I accidentally used salted butter, a ridiculous mistake which actually gave a sort of pleasant savoury kick to the buns which made them, for me, a bit more breakfasty than treaty.

Also, next time I try these, I very much plan on swirling in a teaspoon or two of cream cheese into the batter along with the raspberry jam. I think this could make for a rather nice, gooey centre. Or it could go terribly wrong. I’ll keep you posted.