Swiss Chard: a cure-all, even insecurities.

Rumours of the demise of this blog have been greatly exaggerated (for ‘exaggerated’ please read ‘one or two people asked about it’). OK, so it did look, for a while, like this whole thing had ground to a halt before it had really got going. I blame a certain film about both food and blogging that came out recently and sent me into a curled up ball of insecurity, rocking myself to sleep whilst mumbling ‘I can’t do it… I can’t…’

Alright, so that might actually be exaggerating. But it’s true that I did feel a little lost and unsure about this whole thing. I’ve sort of gotten over it a little bit and decided the only way forward is to keep going and see what happens. Out of the frying pan and all that.

And so. This brings me to my next blog. Which is about an ingredient that has brought a whole lot of joy into my heart…and belly, of course. I’ve become a little obsessed with Swiss Chard of late- it’s in season at the moment so i came across it at a market and couldn’t really resist it- it’s so pretty! And tasty. Sort of like an woody spinach, it looks a bit like rhubarb, but has distinctly peppery, earthy taste. 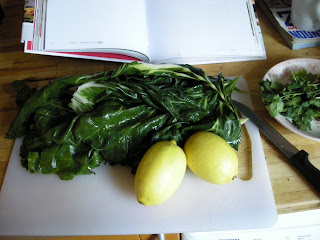 chard and lemon, hand in hand.

My favorite recipe that I’ve been using it for recently is in a lentil soup with lots of spices and lemon. It’s originally from the Ottolenghi cookbook and I’ve reproduced it for you here. You can definitely be a bit more slapdash with the ingredients, if you don’t have coriander seeds at home, for example, maybe some cumin or fennel ones would do. What I’ve really enjoyed about this is it’s practicality. I’ve done big batches of the stuff and then ladled it in to plastic bags and frozen them. In the morning I grab one of these bags and take it with me to work, where I heat it in the microwave for lunch. My colleagues have been mighty jealous! 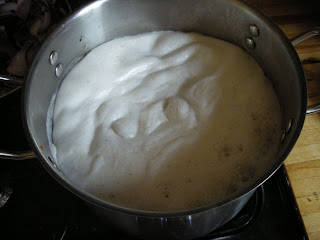 2. Remove about half the lentils with a slotted spoon or whatever you have to hand- set aside. Liquidise the rest in a blender or in the pan with a stick mixture, if you have one. Return the rest of the lentils and season.
3. Thinly slice the onions and put in a frying pan with the olive oil, cook gently until soft (about 5 min)
4. Remove the large stems from the chard and discard (I’ve been saving them and using them as a base in spinach and lemon risottos. Delish!) Rinse the leaves thoroughly, then chop roughly along with the coriander.
5. Mix the onions, chard and coriander into the soup and then season with the cumin, cinnamon and some salt and pepper. Reheat the soup for 5 min.
6. Crush together the garlic and coriander seeds to a roughish, chunky paste. Melt the butter and add the mixture, frying for about 2 min on a medium heat, till the garlic starts to colour and caramelise a bit. Add to soup and stir. 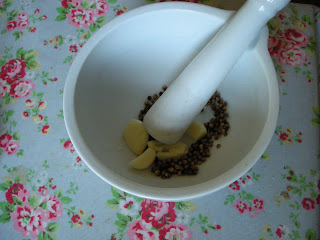 7. Remove from heat and cover with a lid to let mixture infuse properly. Add plenty of lemon rest and juice to taste. Serve with wedges of lemon, coriander garnish and a chunk of your favorite bread.
8. Once soup has cooled, you can freeze it- I put mine in portion-sized sandwich bags so I can grab one in the morning and reheat it at work. Sometimes I even remember to put a few lemon wedges and any leftover coriander in another sandwich bag to take along with me.
The second swiss chard recipe I’ve tried lately is a lovely Swiss Chard Torte from Anna Del Conte’s autobiography ‘Risotto with Nettles’ which is punctuated with lovely recipes from her life as a cook. Del Conte’s prose is incredibly engaging and she’s had quite the life- I would definitely recommend getting your mitts on a copy if you can! The torte is packed with salty squishy satisfying flavour and because it doesn’t actually have any pastry, it’s probably quite healthy. Probably.

I know that anchovies and tarragon aren’t necessarily to everyone’s liking- in this recipe they really are both very subtle flavours and not at all overpowering. However, if either of those two ingredients send shivers down your spine, I would suggest omitting the former and replacing the latter with flat leaf parsley.

1. Cook your spuds in their skins

2. Drain the spuds and peel them (when they’ve cooled a bit) and then puree them by mashing, ricing or pulsing. Add 2 tbsp of olive oil.

3. Remove the green leafy parts of the chard (Anna Del Conte suggests using the stalks in a cheesy béchamel sauce… mmmm…). Wash the leaves thoroughly and put them, still wet, in a large pot with a tsp of salt. Cook over a lively heat until tender.

4. Drain the chard and squeeze out any moisture. Chop coarsely

5. Fry the onion in 3 tbsp of oil for about 7 min or so. Stir in garlic, tarragon and parsley and sauté for about 5 min. Add the chard and sauté for another 5-7 min, stirring frequently. Transfer contents into the bowl containing the potatoes.

7. Add eggs and egg yolk, Parmesan, cheese, anchovies and pepper to the vegetable and spud mixture, and mix thoroughly- Anna says hands are best! Taste to check the seasoning.

8. Use a 18 cm/ 7 in spring-clip tin that has been greased and lined and then greased again before having breadcrumbs sprinkled into it.

9. Spoon the swiss chard mixture into the tin and drizzle the remaining oil on top. Bake for 40-50 minutes, until set.

10. When cooked, turn the torte out onto a plate and allow to cool a bit. Anna suggests serving this at room temperature, but I also had it cold for lunch the next day with a bit of salad and ham and it was a very pleasant experience indeed.

Many thanks to B at Broadway Market fruit+veg stall for the swiss chard!